From the Journals of Baron Von Reck 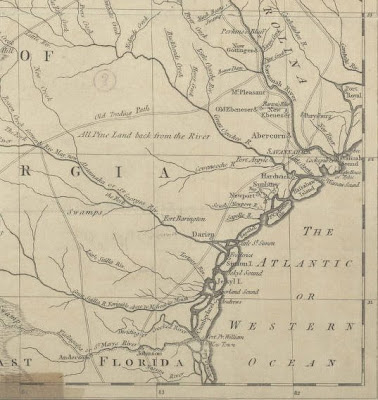 Of the town of Savannah the Baron Von Reck favors us with the following impressions: "I went to view this rising Town, Savannah, seated upon the Banks of a River of the same Name. The Town is regularly laid out, divided into four Wards, in each of which is left a spacious Square for holding of Markets and other publick Uses. The Streets are all straight, and the Houses are all of the same Model and Dimensions, and well contrived for Conveniency. For the Time it has been built it is very populous, and its Inhabitants are all White People.

"And indeed the Blessing of God seems to have gone along with this Undertaking; for here we see Industry honored and Justice strictly executed, and Luxury and Idleness banished from this happy Place where Plenty and Brotherly Love seem to make their Abode, and where the good Order of a Nightly Watch restrains the Disorderly and makes the Inhabitants sleep secure in the midst of a Wilderness.

"There is laid out near the Town, by Order of the Trustees, a Garden for making Experiments for the Improving Botany and Agriculture; it contains 10 Acres and lies upon the River; and it is cleared and brought into such Order that there is already a fine Nursery of Oranges, Olives, white Mulberries, Figs, Peaches, and many curious Herbs: besides which there are Cabbages, Peas, and other European Pulse and Plants which all thrive. Within the Garden there is an artificial Hill, said by the Indians to be raised over the Body of one of their ancient Emperors. I had like to have forgot one of the best Regulations made by the Trustees for the Government of the Town of Savannah. I mean the utter Prohibition of the Use of Rum, that flattering but deceitful Liquor which has been found equally pernicious to the Natives and new Comers, which seldom fails by Sickness or Death to draw after it its own Punishment.”

Image from Georgia's Virtual Vault, http://content.sos.state.ga.us/u?/hmf,2.
Entry from "The History of Georgia," By Charles Colcock Jones, Published 1883 by Houghton, Mifflin and Co., Original from the University of California
v.1, Digitized Jun 6, 2007 for Google Books. p. 170.