A Letter to Gen. Oglethorpe from Samuel Wesley 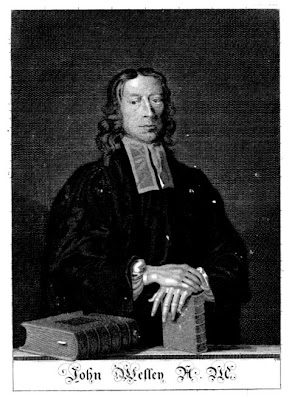 "HONOURED SIR,--May I be admitted, while such crowds of our nobility and gentry are pouring in their congratulations, to press with my poor mite of thanks into the presence of one who so well deserves the title of UNIVERSAL BENEFACTOR OF MANKIND! It is not only your valuable layouts on many accounts to my son, late of Westminster, and myself, when I was not a little pressed in the world, nor your more extensive charity to the poor prisoners; it is not these only that so much demand my warmest acknowledgments, as your disinterested and immovable attachment to your country, and your raising a new colony, or rather a little world of your own, in the midst of wild woods and uncultivated deserts, where men may live free and happy, if they are not hindered by their own stupidity and folly, in spite of the unkindness of their brother mortals.

"I owe you, Sir, besides this, some account of my little affairs since the beginning of your expedition. Notwithstanding my own and my softs violent illness, which held me half a year, and him above twelve months, I have made a shift to get more than three parts in four of my Dissertations on Job printed off, and both the paper, printing, and maps, hitherto, paid for. My son John at Oxford, now that his elder brother is gone to Tiverton, takes care of the remainder of the impression at London; and I have an ingenious artist here with me in my house at Epworth, who is graying and working off the remaining maps and figures for me; so that I hope, if the printer does not hinder me, I shall have the whole ready by next spring; and: by God's leave, I shall be in London myself, to deliver the books perfect. I print five hundred copies, as in my proposals;
hereof I have about three hundred already subscribed for; and among my subscribers, fifteen or sixteen English Bishops, with some in Ireland.

[* These Dissertations are comprised in a large folio volume, in Latin, which was published by subscription. Oglethorpe subscribed for NINE copies, two of them large paper: a greater number than was subscribed for by any other man.]

"If you will please herewith to accept the tender of my most sincere respect and gratitude, you will thereby confer one further obligation, honoured Sir, on "Your most obedient and humble servant,

"To James Oglethorpe, Esq."
The learned writer of this beautiful epistle was disappointed in his plans. Instead of going to London the following spring, to deliver with his own hands to the subscribers the elaborate volume upon which he had expended much time and thought, he passed to his final reward; dying on the 25th of April, 1735, in the seventy-second year of his age. After his death it was proposed to his sons John and Charles, to accompany Oglethorpe to Georgia; John as a Missionary to the Indians, and Charles as Oglethorpe's Secretary. To this proposal they demurred for some time, particularly on account of the situation of their mother; but when the matter was proposed to her, she at once gave her free consent. Notwithstanding her widowhood, and the straitened circumstances in which she was placed, this noble-minded woman said, "Had I twenty sons, I should rejoice that they were all so employed, though I should never see them more."+

[* This letter is copied from c, Biographical Memorials of James Oglethorpe, Founder of the Colony of Georgia, in North America. By Thaddeus Mason Harris, D.D. Boston, 1841." This production of the American press is characterized by extensive research, and the facts which it embodies are extremely interesting.
+ Moore's Life of the Rev. John Wesley, vol. i., p. 234.]

Image from Pitts Theology Library Digital Image Collection, John Wesley appears here in his academic garb as an Oxford don. This frontispiece comes from the first edition of Wesley's Explanatory Notes Upon the New Testament (1755).